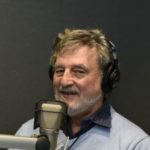 Professor Mollenkopf directs The Graduate Center’s Center for Urban Research. He also coordinates our interdisciplinary concentration in public policy and urban studies. He weighs in on the presidential election and the unusual number of mayors vying for the Democratic nomination.

For more episodes of The Thought Project podcast, visit SoundCloud. Listen to us on Apple Podcast and Spotify.